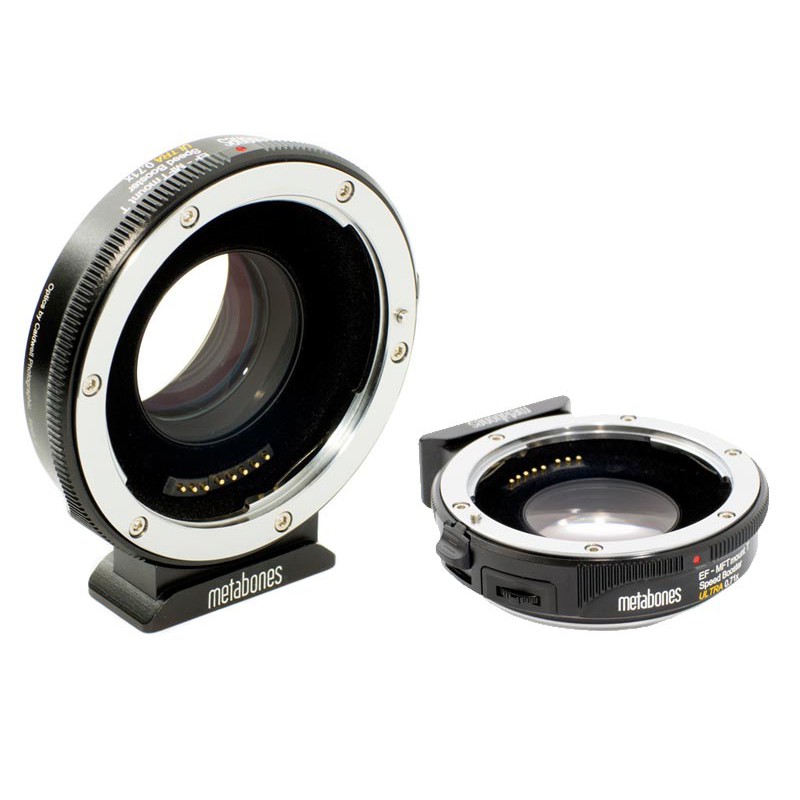 Vi code : MB_SPEF-M43-BT4 - Id : 773693
Features and BenefitsOptical
Increase maximum aperture by 1 stop
Increase MTF of any lens attached
Makes lens 0.71x wider
Patented 5-element/4-group optical design incorporating ultra-high index tanatalum-based optical glass by Caldwell Photographic in the USA
Supports 16:9 video with DX lenses.Electronic
Autofocus
Can be powered either by camera body or by third-party external 5V power source (not included)
Iris/aperture controlled by the camera body
Image stabilization (IS) lens support
Electronic manual focusing (e.g. EF 85/1.2L II and discontinued EF 50/1.0L)
EXIF (focal length, aperture, zoom range)
Distance and zoom display on camcorders (requires lenses supporting distance information)Other
Detachable tripod foot compatible with Arca Swiss, Markins and Photo Clam ball heads.
Flocking material coating to reduce internal reflection.
Compatible with all MFT mount cameras, including GH4, OM-D, Blackmagic Cinema Camera, Blackmagic Pocket Cinema Camera and JVC GY-LS300.Limitations EF-S lenses require modification to fit (but third party DX lenses can be used without modification)
Some EF-S and DX lenses may not have enough coverage of the entire image circle for stills after widening by 0.71x (but video will have enough coverage).
No video AF for Olympus
AFC (continuous AF) and AFF (flexible AF) modes are not supported
Panasonic video AF may hunt more than a native lens or have unsatisfactory performance.
EF-mount lenses are not silent but may make audible click noises during autofocus operation and iris changes which may be picked up by the built-in microphone of the camera. An external microphone is recommended for video.
Iris changes are unsmooth but in 1/8 stop steps which may be noticeable in video recordings. Programmed exposure mode and shutter priority exposure mode should not be used for video.
No support for in-camera correction such as peripheral shading, CA and distortion
Designed to cover a 24mm image circle but not enough to cover Super35 so JVC GY-LS300 needs to have VSM configured to 86% (4k)Always Enhance and Never Degrade the Performance of the Attached Master Lens
Like the ULTRA series for Sony E-mount, the new Speed Booster ULTRA m43 uses an advanced 5-element 4-group optical design incorporating ultra-high index tantalum-based optical glass. However, the new design is specifically optimized for the Micro Four Thirds sensor and filter stack, and as a result achieves an astonishing level of performance that sets a new standard for focal reducers. Like the revolutionary original Metabones Speed Booster® announced in January 2013, the Speed Booster ULTRA m43 has a magnification of 0.71x, and so it effectively reduces the crop factor of mirrorless Micro Four Thirds mount cameras from 2.0x to 1.4x. However, the new ULTRA design makes very effective use of exotic materials at the furthest limit of glassmaking technology, and as a result is almost perfectly corrected for use with all fullframe SLR lenses regardless of aperture. The Speed Booster ULTRA m43 will also work extremely well with many DX and APS-C format lenses provided the image circle of the lens is large enough. Optical performance of the new Speed Boosters is so good that the MTF of any lens attached to it will be improved. Even the latest generation of ultra-high performance SLR lenses such as the Zeiss Otus series can be improved by adding a Speed Booster ULTRA m43. (More information can be found in the press release here and whitepaper here)

Autofocus with an Optimum Balance of Accuracy, Speed, Consistency and Reliability
New in Speed Booster ULTRA for Canon EF Mount to Micro Four Thirds is autofocus support, subject to certain limitations (see table above for details). We are pleased to report that Panasonic Micro Four Thirds camera bodies are capable of autofocusing accurately even if the maximum aperture of the Speed Booster and the lens combined is in the sub-f/1.0 range. Although our first and foremost priority is accuracy, we are able to make great strides in autofocus speed as well.