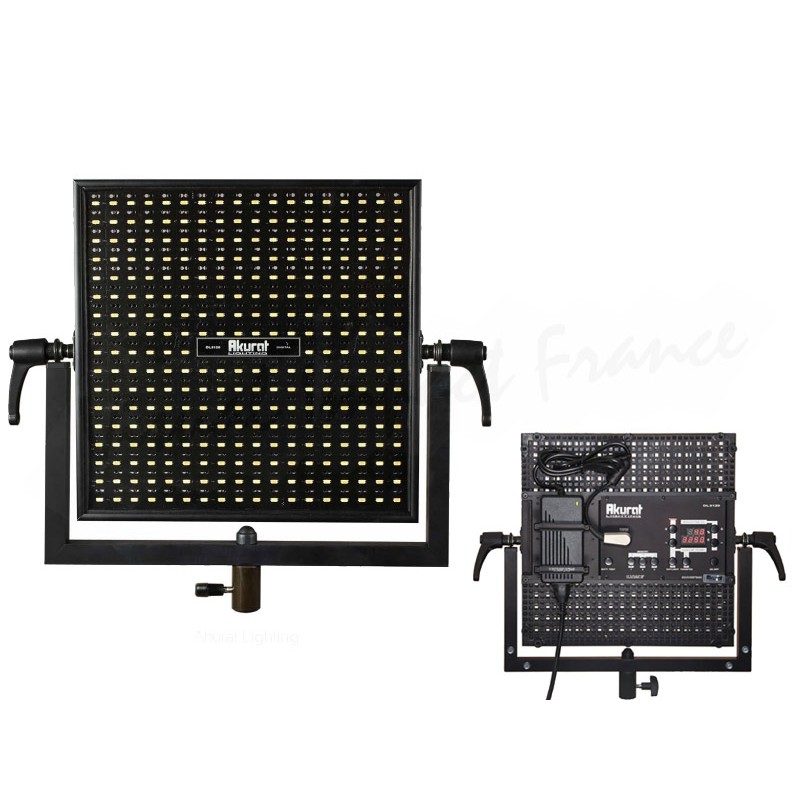 DL3120 LED panel emits maximum light output in excess of 5000 lumens. It was designed in dual balance technology, based on a new, flat SMD LEDs with high power and high color rendering. The adjustment of color temperature and brightness of the light are controlled by the microprocessor driver, which gives you extraordinary opportunities. In addition to brightness adjustment they are available two standard color temperatures: daylight and tungsten. You can also manually adjust the color temperature in 3100-5650K range and save the current settings in non-volatile flash memory. A special feature of the controller is a simple and intuitive interface.

The panel allows you to adjust brightness practically with no change in color temperature. It's a great tool to work both on a film set as in the studio. Optional DMX512 controller allows remote control in television studios or when the lamp is placed in hard to reach places.

The control panel is located In the back of DL3120 and consist of the control buttons, a display indicating the current brightness setting in percent and the current color temperature in Kelvin, LEDs signaling the mode of light.

User memory
Non-volatile memory can store three settings of panel (brightness and color temperature). To recall the settings from memory, press one of the memory buttons. To save the current settings to memory, hold the selected memory button longer. Memory usage is indicated by the lights on the buttons.

The memory controller also saves the current state of the panel and restores it after turning on the fixture (using the ON/OFF button) or after power loss.

AC operating
The DL3120 is equipped with a standard desktop power supply. AC adaptor allows the continuous work of the light from a 230V as well as 110V. The removable power cord is equipped in an European plug. To use the DL3120 in countries without the European standards, AC adapter should be provided with a suitable cable or adapter. The power supply connector is manufactured by a reputable company and its professional metal construction provides the long-term reliability. The connector is equipped with a threaded bushing, and protects the cable against accidental disconnection.